Did the Beatles love "you"?

Overanalysing a claim that putting "you" in the first line of a song makes it better.

On page 3 of Help! 50 Songwriting, Recording and Career Tips used by the Beatles, author David Rowley suggests that songwriters should put the word "you" in the first line of their songs:

Around half of all Lennon-McCartney lyrics use the magic songwriting words 'you' or 'your' in the first line.

For Beatles fans, this raises some incredibly unimportant questions.

To answer these questions, we'll do some analysis on the lyrics of Lennon-McCartney (because who cares about Ringo), and we'll see how the use of "you" (a.k.a. the second person perspective) has affected the success of songs in the Billboard music charts. 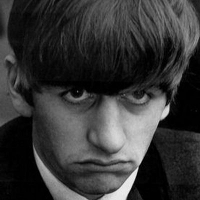 How many Lennon-McCartney songs are addressed to "you"?

I downloaded the lyrics of the Beatles' "core catalogue" studio albums (code). Instrumental songs, cover songs and songs credited to Ringo Starr / George Harrison were removed manually. This left a total of 138 songs, about 3/4 of the full ~180 songs published by Lennon-McCartney.

Here's a comparison with some other words. Surprisingly, Lennon-McCartney's love of the second person was outstripped by their love of themselves, as 86% of lyrics contain the word "I" (or "me", or "my", or "myself"). 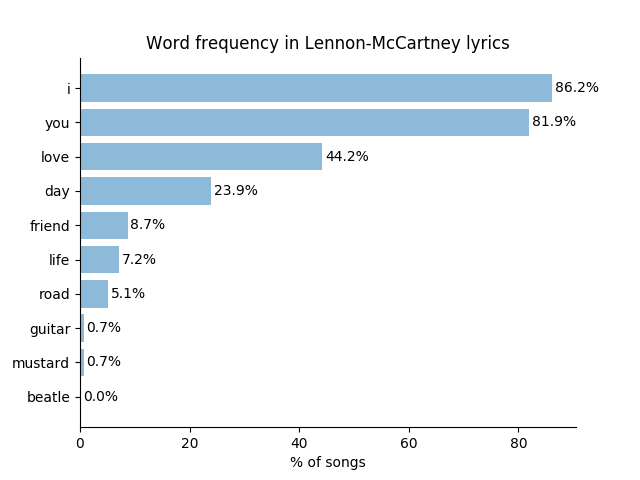 Other observations: in 138 songs, they never once mentioned the Beatles. Not even in Glass Onion. And roads, or the things that are done in them, are almost as popular a theme as life itself.

Chart success and you

Lennon-McCartney loved "you", evidently, but can we show that this aspect of their style is worth copying? Does it lead to more successful songs?

I then gathered the lyrics of 5184 (91.3%) of those songs (code, more code, even more code). The ones I left out were by the Beatles, instrumental, or had lyrics that were difficult to track down on the internet.

Here are the success scores of the songs with lyrics, as a cumulative frequency plot. 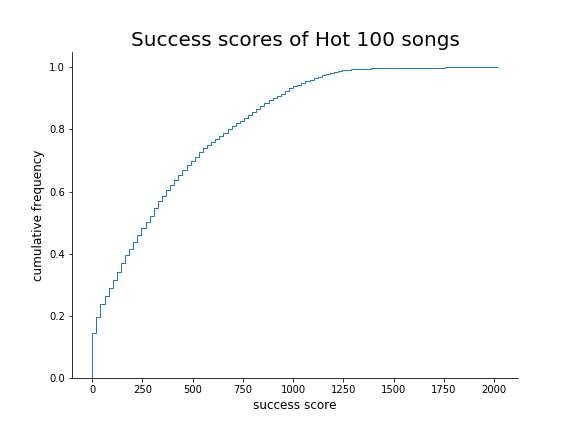 From left to right, the curve increases as the success score overtakes more and more songs. The curve starts off with a sharp rise, gobbling up songs that barely made it onto the chart, such as the slightly creepy Father Knows Best by the Radiants: "Whenever I'm in trouble I ask my dad / For his advice / ... / He said to make your girl love ya / ... / You got to get tough / And treat her wrong / And if she cries, so what / She's trying to put you to a test". It then has a long tail of extremely successful and enduring songs, such as Everyday People by Sly & The Family Stone and...

Analysing the lyrics of all the songs, we see that Lennon-McCartney were not at all exceptional in their love of the second person perspective. 27% of the songs contain "you" in the first line, while 88% contain "you" somewhere in the lyrics.

Finally, to see if there's a relationship between use of the second person perspective and chart success, let's look at the distribution of success scores for songs that contain "you" (n=4564) versus songs that don't (n=620). 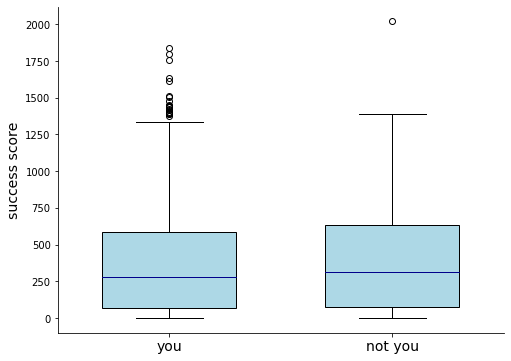 The coloured boxes show the range of success scores you would be left with if you dropped the 25% least successful and 25% most successful songs. The horizontal dark blue line is the median success score, which is better than exactly 50% of songs. The whiskers extending from the boxes represent the full range of the success scores -- except for outliers, which are represented by circles. Wipe Out sits triumphantly above them all.

As it turns out, songs that don't contain "you" have a higher median success score by 13% (278 vs 316), contrary to what we would expect if we believed David Rowley's songwriting tip. 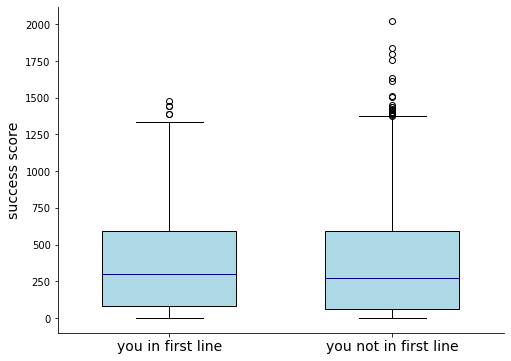 We have seen that the second person perspective was overwhelmingly common in 60s song lyrics. More than Lennon-McCartney secret sauce, it was standard songwriting practice. Furthermore, our overanalysis hasn't shown the use of "you" to have a correlation with chart success. Considering that it was used in almost 90% of chart songs, however, there has to be something of secret sauce about it. Chart-hitting 60s songwriters must have known what they were doing... right?