Finding Mona Lisa in the Game of Life

Using a SAT solver to find Game of Life states that turn into pictures.

The Game of Life is a 2d, grid-shaped petri dish. Each grid square in the dish is a cell that can be either alive or dead.

The petri dish changes state according to simple rules:

Every cell in the above animation lives and dies according to these rules.

Besides resulting in cool-looking patterns, it has been proven that the Game of Life ("Life" for short) can simulate anything that can be done by a computer, whether that's summing numbers or captioning images of cats. Not bad for a petri dish.

What does this have to do with Mona Lisa? It's easy to load a black & white picture as a Life state, where black pixels are live cells and white pixels are dead cells. This allows us to run a Life simulation with a state that looks like Mona Lisa. The dark regions die off immediately due to overpopulation, leaving an outline, which then melts away further and leaves only hints of the original picture.

This looks kinda cool, but what if we want to find a Life state that eventually, after following the rules of Life for a few rounds, reaches a state that looks like Mona Lisa? This requires working backwards instead of forwards from the target picture, which is a much more difficult problem.

In this article, we're going to explore just how difficult this problem is, and how it can be attempted using what are known as "SAT solvers". We'll then look at animations of flowers, Steve Buscemi, and other objects of interest that we can generate with the solution.

Life, the Universe and SAT Solvers

We call Life state A the "parent" of state B if A turns into B by following the rules of Life. The reason that it's difficult to find the parent of a state is that the rules of Life are non-reversible. There's no direct way to go from a Life state to its parent, and in fact, it's possible for a state to have multiple parents or even no parents.

What we can do is construct a boolean equation that captures the conditions that any parent state of our target state must satisfy, then solve it to find a parent, if a parent exists.

(Note: a boolean equation is an equation where the variables take on true / false values, and where the operators, instead of the pluses and minuses that we usually see, are replaced by boolean operators such as AND and OR. For example, the equation sour AND (NOT sweet) is solved by setting sour:=true and sweet:=false. Read more here).

In the boolean equation that we construct, each variable corresponds to a cell and the value of the variable indicates the health of the cell. False means that the cell is dead, while true means that it's alive. If we find a set of variable assignments that causes the equation to evaluate to true, then the corresponding Life state (with false/true variables corresponding to dead/live cells) is a parent of our target state.

What will the equation look like? Let's consider a 3x3 Life grid as an example.

The middle cell, b2, is alive. For it to be alive in this state, one of the following must be true:

Keeping in mind that true means alive and false means dead, this can be translated to a boolean equation in a fairly literal way.

If we repeat this construction for every cell in the grid and chain them together using ANDs, we end up with an equation that we can solve to find a parent of the target state. And, as it happens, there are many "SAT-solving" programs that search for solutions to boolean equations. Once we have our equation, we can ship it off to our SAT solver of choice and sit back, relaxedly sipping our lattes until it gets back to us with a result.

Great, let's move on to the pretty pictures

WAIT. While this is nice in theory, there are significant "buts".

The first "but" is that, as we touched on in the previous section, not all Life states have parents. Such states are known as Gardens of Eden. Here's an example of a Garden of Eden from Wikipedia. It's impossible to reach this state from any other 9x33 Life state.

The second "but" is that, as the number of cells increases, so too does the difficulty of the problem. Trying to generate a SAT equation for ~1800 cells blew up my program by consuming the entire 1GB of memory that was available to it. The time taken to find the parent of a Life state also starts to become prohibitive with more than ~400 cells. SAT problems, after all, are in the NP-complete class of problems, which means that they are damn hard to solve with current methods.

To demonstrate this, below are the timings I got after running backsearch on random Life states of varying sizes, backsearch being the process of finding a Life state's parent. This includes the time taken to generate the SAT encoding. For the record, my processor is a wimpy i3-8130U 2.20GHz. 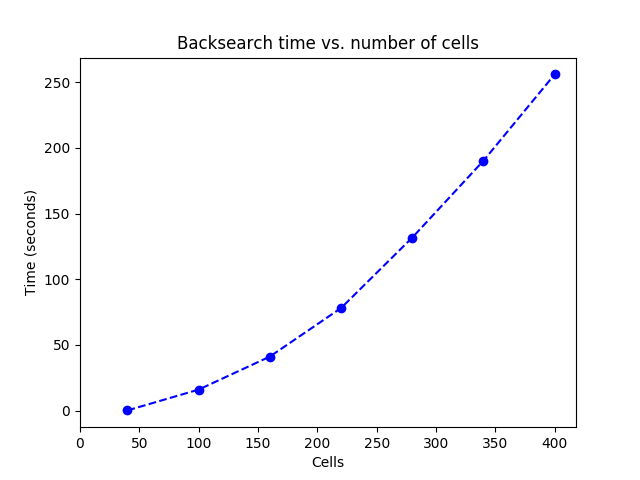 As a result of these "buts", any pictures we use in this article will be 20x20 or less (<=400 cells). Beyond that, the problems take a long time for my computer to solve, and there is often no solution.

Here's the output of backsearch on a modest 13x11 sad face. It manages to find 2 previous states before landing in a Garden of Eden. Interestingly, there's no hint of the sad face in the first state, and not much more in the second state, although the live cells do seem to converge towards their final positions.

Here's the result of running backsearch on Mona Lisa's face. The parent we find looks nothing like Mona Lisa. It's also a Garden of Eden, so we've run into a dead-end and can't backsearch any further.

More results, this time on a flower. The parent state found by the SAT solver is, once again, a Garden of Eden. It contains a faint outline of the flower.

Marilyn Monroe and her Garden of Eden parent.

Steve Buscemi, who looks like a pissed-off SMBC character when in black and white.

Unfortunately, besides the sad face, we only ever manage a single successful backsearch before running into a dead-end.

It's possible to find parents of Game of Life states, although it's a difficult problem for computers to solve. We could possibly speed up the search by using a different SAT encoding of the problem. We could also replace MiniSAT with a different SAT solver.

Finally, the Game of Life is just one of many possible rulesets that define the behaviour of petri dishes. It would be interesting to experiment with different rulesets and see if they're more amenable to the goal of gradually evolving chaos into a picture.

On that note, here's a parting gift. Run this Life state through a 19x19 Life simulator and see what happens. 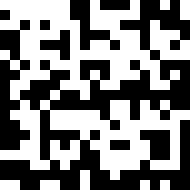 On further reflection, the main limit on size seemed to be cl-sat, both because it was slow to convert the SAT expression to the form expected by SAT solvers and because it exhausted memory rather easily. I imagine it would be possible to handle much larger Life grids by cutting out cl-sat and writing the SAT constraints directly to a file, which could then be passed to your SAT solver of choice.

Also, based on Reddit conversation, it seems that you can avoid Gardens of Eden by searching multiple generations into the past in the same SAT expression. To clarify: if you go original -> parent -> grandparent, then parent can turn out to be a Garden of Eden. The proposal is to go directly from original -> grandparent. I don't know to what extent this would increase the complexity of the expression.

Maybe I'll come back to this some day and find a giant Life state that turns into a detailed portrait of John Conway.

Some fun stuff I came across while researching this article.