Random RGB values that average to N; or, Pointlessness and Probability

On this episode of Problems That Don't Need to Be Solved, we have a doozy from r/computerscience.

Generate a random RGB value where the average of R, G and B is A, A being an integer from 0-255.

In other words, we have to generate a random RGB value so that (R+G+B)/3=A, or equivalently, R+G+B=3A. We'll solve this problem using the Python programming language and learn some neat combinatorics along the way.

The first algorithm that might come to mind is to generate R, G and B one at a time, ensuring that we satisfy the constrants of the problem at each step. Being RGB, they have to be in the range 0-255. We must also ensure that it remains possible to satisfy R+G+B=3A. If we stay within these constraints, then we will always end up with a valid RGB value with an average of A, no matter what value A has. Note that there's always at least one solution to R+G+B=3A, and that's the RGB value (A,A,A).

This approach seems reasonable, and if we run a test that checks whether the resulting RGB values have an average of A (for A=1), it passes with flying colours.

However, this doesn't give us the full picture. Besides ensuring that R+G+B=3A, we also need to check that all of the possible RGB values are equally likely to appear, since the problem statement requires randomness. Graphing the frequency of the possible values, we see that this is not the case. 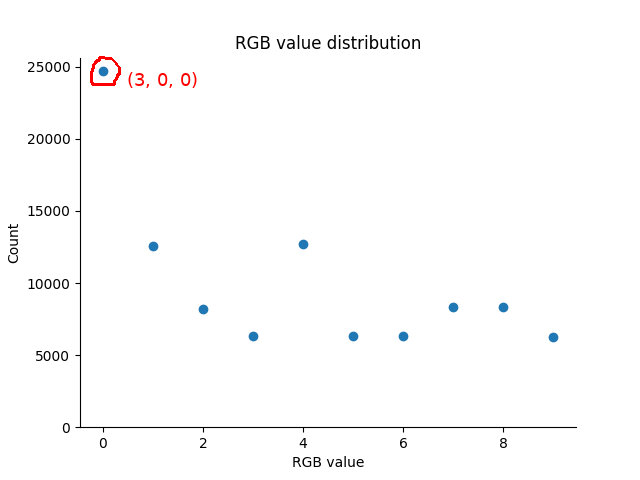 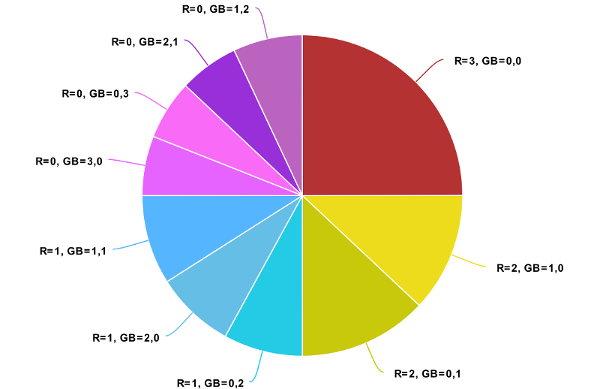 Well, I'll be damned! What's the darn-tootin' solution, then?

Hence, before picking R at random, we have to calculate the probability of each of its possible values.

How do we calculate this for any 'r' and any 'A'? Let's consider the numerator and the denominator separately.

The expression for #{RGB values that average to A} is below. It looks scary, but we'll explain each part in an intuitive manner.

(Syntax note: () is the "binomial coefficient" function, which can also be written as nCk: "the number of combinations of k things that you can choose from n things". For example, 10C2 is the number of possible pairs of socks you could make from 10 socks).

Let's consider an example where A=2, 3A=6. Imagine that we have the numbers 1-6 lined up with spaces between them. We have to put "partitions" in 2 of the spaces in order to divide 3A=6 between R, G and B, as seen below.

HOWEVER, to complete the first part we also have to account for the case where any of R, G or B are 0. For that reason, we need 3 extra spaces acting as flags that let us set each of R, G and B to 0. If we put a partition in one of these spaces, it means that the corresponding R/G/B is set to 0.

Here's an example where 3A=264. We set aside 256 numbers for R, then partition the remaining ones like we did before. If we "enabled" the R=0 flag, then the final value of R would just be 256. 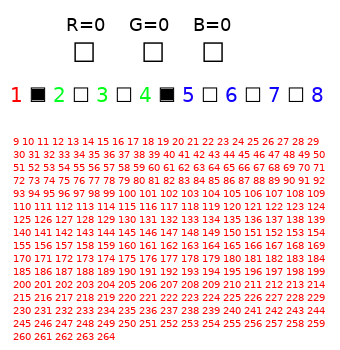 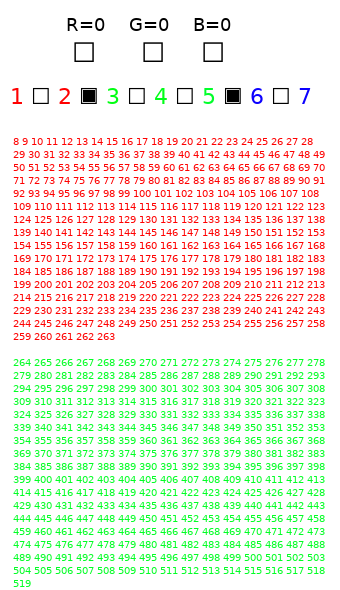 And with that, we understand how to calculate #{RGB values that average to A}. Which, in turn, allows us to calculate P(R=r)!

Putting it all together: using P(R=r) to generate random RGB values

The hardest part is done. Now we pick R randomly based on P(R=r). After that, G and B can be determined from a random choice with uniform probability like in the "first attempt" algorithm.

Here it is in Python code.

Besides generating valid RGB values, all of the possible RGB values seem to have an equal probability of being generated (here, for A=245). 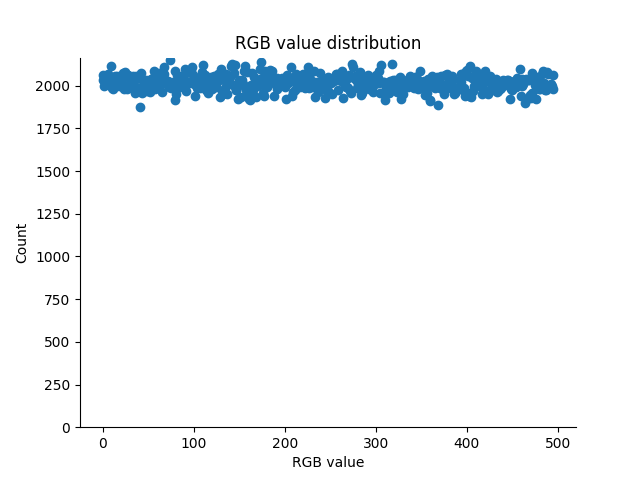 We've battled through the combinatorics and come out the other side with a working algorithm. An extension to the algorithm that might be interesting would be to make it work for the "general" case. That is, generate a random tuple V = (V1, V2, ..., Vn) such that the average (V1+...+Vn)/n is A, and where Bl <= Vi, A <= Bu. The combinatorics behind this would be similar to what we did above.

A different approach to the problem would be to generate random RGB values directly from the sequence of valid values rather than going through the rigmarole of calculating probability distributions. In other words, if there are N possible RGB values, we generate a random number 'k' between 1 and N and pass it to our magic function 'f' so that f(k) outputs the kth RGB value with the target average.

That's all for now. Tune in for the next episode of Problems That Don't Need to Be Solved, where we'll be looking at Rubix Cubes.