Boarding a plane, you wait behind a man so unwashed that you can almost see a stink cloud emanating from his trenchcoat. Two rows ahead, an old woman struggles to lift her humongous suitcases, each of which is large enough to fit her inside. Behind you is a red-eyed, defeated mother, holding a shrill baby. "There has to be a faster way to get through this," you think to yourself. Then the baby vomits into your backpack.

Consider a typical plane in Europe, such as Ryanair's Boeing 737-800. 2 entrances for passengers, one at each end of the plane. 200 seats spread across 32 rows, with an aisle down the middle.

This would further reduce the interference between passengers, and, in theory, further reduce boarding times. We're going to run an extremely simple simulation in Python to test this theory.

We first run a simulation with entrances at the ends of the plane. Then we run a version with centered entrances.

Just to be scientific about it, we can run both versions of the simulation 10,000 times and see what the average number of time steps is for each. Here are the results: 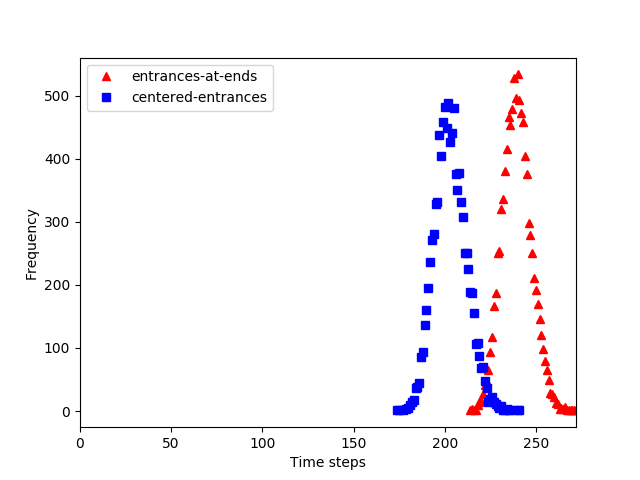 The centered-entrances design is, on average, ~15% faster in this run of the simulation.

Of course, there may be engineering or safety issues that prevent plane manufacturers from playing around with their plane designs like this. Perhaps placing the entrances at the ends gives space for more seats. Perhaps the wings and emergency exits get in the way of centered entrances. Etcetera.

Whatever the case, it's a nice distraction to think about as the trenchcoat stink cloud wafts its way towards you and the baby in your vicinity makes threatening heaving motions.

Further thoughts on the efficiency of plane boarding can be enjoyed in this fun video by CPG Gray, which doesn't mention plane design but discusses a number of algorithms for faster boarding.

Appendix B: the code

For the curious, here's the script used to run the simulation and animate it.