Yet another Wordle solver

Another one for the pile. 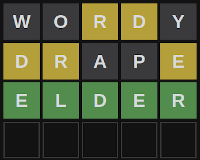 We use that information about the secret word to form our next guess, DRAPE, which tells us that there's an 'E' in the secret word, in addition to the 'R' and 'D'. Finally, we guess ELDER, which turns out to be the correct word. All the letters are highlighted in green, which means they're all in the correct position.

My Wordle solver (let's call it YAWS for short - Yet Another Wordle Solver) is simple. It keeps a list of possible secret words, starting with all 2315 words in Wordle's dictionary. It removes words from the list after each guess, according to the hints it receives. If the solver knows that the secret word begins with 'e', for example, it can remove all words that don't begin with 'e'.

The next word picked by YAWS is given by

which is just the original explanation in (crappy) maths notation. We minimise (using argmin) the expected size (E[|...|]) of the new set of secret words.

The expected size can be expressed as

where each secret is equally probable, i.e. P(X=x)=∣S∣1​.

The final piece of the puzzle is to compute the new secret set r(g,x,S). If we have a hint function h that accepts a guess and a secret word, and returns a string representing the hint, such as "GYBBG" (green, yellow, black, black, green), then the new secret set is

In other words, we only keep secret words that return the same hint as the true secret word.

A better approach is to group the secrets based on the hint they will return for a given guess g. Then we don't need to loop over the secrets a third time, because we already know which secrets give the same hint. This makes the complexity O(n2). Here's the improved algorithm in Python pseudocode.

If that handwavey explanation didn't lose you completely, here are the results! This is the number of guesses made by YAWS when it's tested on all possible secret words, with its first guess being RAISE. I've compared it to my first 28 Wordle scores. 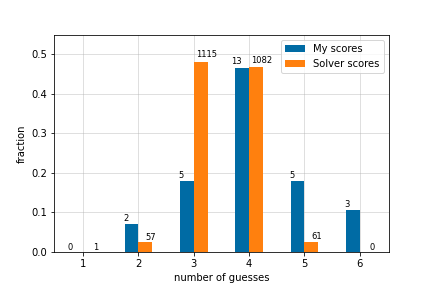 YAWS gets a score of 3 much more consistently than I do, and it never makes more than 5 guesses. It makes an average (mean) of 3.495 guesses, which is pretty close to the best possible average (3.4212). Not bad for a greedy algorithm. For a description of the optimal Wordle algorithm, I would recommend checking out this write-up, which is where I nicked some of the maths notation that I used above.

One last thing. Here's a graph of letter frequency among the Wordle secret words. ETAOIN SHRDLU is often used as a mnemonic to remember the most commonly used letters in the English language, but for Wordle it looks like that should be EAROT LISNCU. 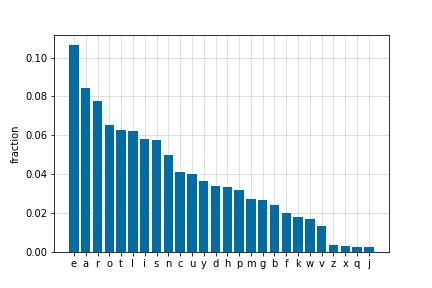